Weekly Review of Oil Market: Oil prices are set to fall this week, as geopolitical concerns cool and a rebound in market supply puts pressure on oil prices

On April 1, US oil prices are set to fall back in the week. A number of factors have put pressure on the short-term trend of oil prices. The release of strategic crude oil reserves by the United States, the gradual increase in supply by Russia and Saudi Arabia, and the progress in Russia-Ukraine negotiations have cooled risk aversion, all of which are not conducive to the short-term trend of oil prices. However, as supply and demand are still unbalanced, analysts are still optimistic about the outlook for the crude oil market.

On Friday (April 1), U.S. oil prices are set to fall back this week. A number of factors have put pressure on the short-term trend of oil prices. The release of strategic crude oil reserves by the United States, the gradual increase in supply by Russia and Saudi Arabia, and the progress in Russia-Ukraine negotiations have cooled risk aversion, all of which are not conducive to the short-term trend of oil prices. However, as supply and demand are still unbalanced, analysts are still optimistic about the outlook for the crude oil market. 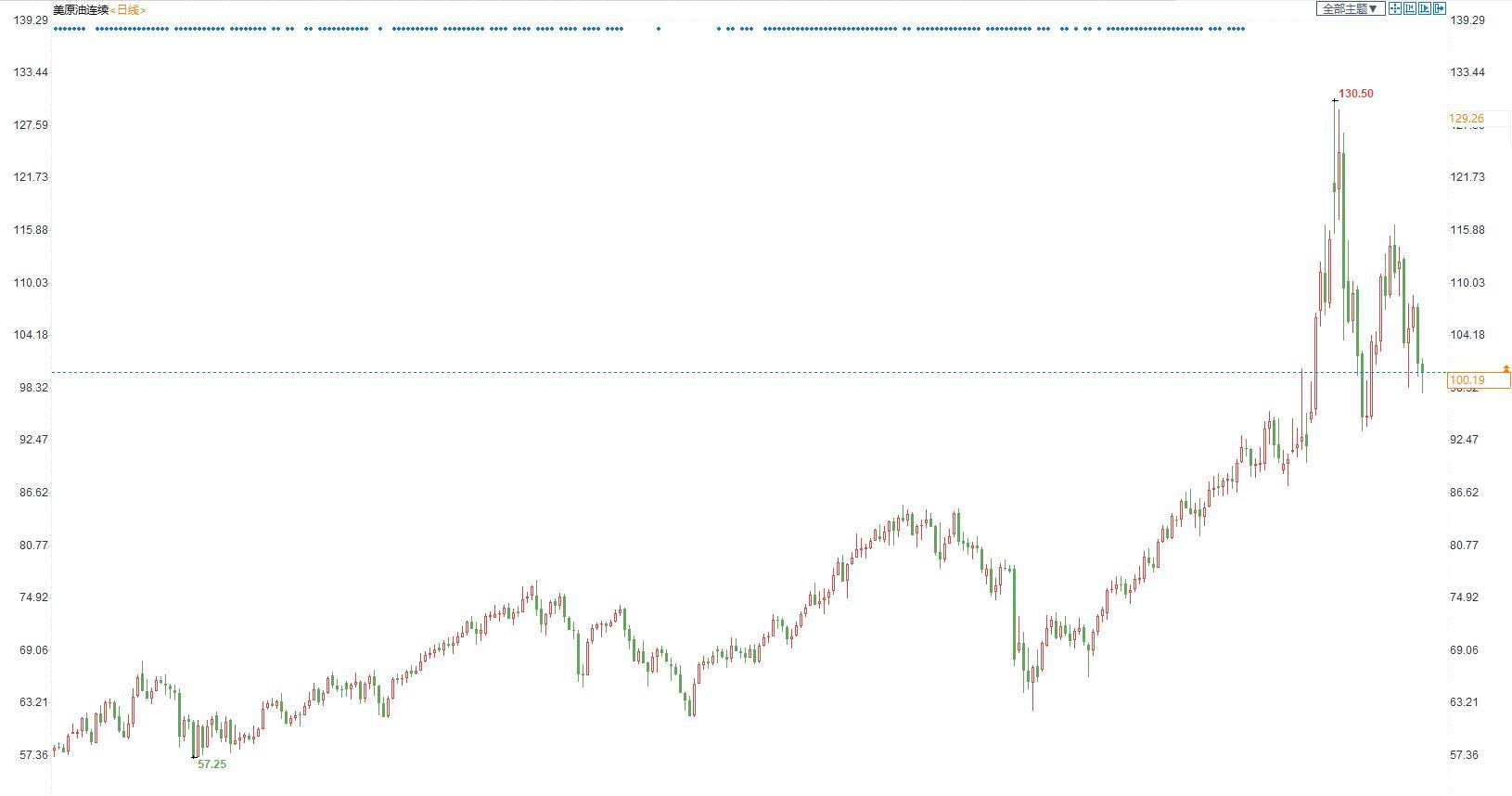 Under a series of financial sanctions from the West, whether Russia's crude oil exports can remain smooth and attract buyers has been a topic that has been closely focused in the commodity market recently. In this regard, Russian companies do not seem to be worried: they are confident that Urals crude oil, which is now at a huge "discount" price, will not worry about selling!It is reported that Russia plans to increase the scale of Urals crude oil exports to the highest in three years next month. This is tantamount to throwing a tantalizing carrot for European refiners now facing high oil prices of $120 a barrel. Transneft, Russia’s state-owned oil pipeline company, recently revealed plans to load tankers with 2.26 million barrels per day (bpd) of crude from three western ports in April, which would be the highest level since June 2019 and also compared to this month. There is a substantial increase.The plan came as a surprise to many traders, many of whom had expected Russia to keep exports steady or even cut exports starting in March. The strength of Russian crude exporters may lie in the huge discount that Urals now trades to Brent , the international benchmark.Russia has offered to sell crude directly to India at a steep discount as sanctions imposed by Western countries on Russia after the outbreak of the Russia-Ukraine conflict reduced demand for Russian crude elsewhere.Russia has offered to supply its flagship Urals crude at a discount of as much as $35 a barrel to pre-Russian-Ukrainian prices in a bid to entice India to boost purchases, according to people familiar with the matter. The overall price of Brent crude has risen by around $10 since the conflict , meaning Russia is offering a bigger drop than current prices.Russia wants India to start buying 15 million barrels under this year's contract, the people said, adding that talks are taking place at the government level. Since the Russia-Ukraine conflict, India is aggressively buying cheap Russian crude oil. Industry data show that since the beginning of this month, about 6 million barrels of Russian crude oil have been shipped to India and are expected to arrive at the port in early April, which is equivalent to half of the total crude oil shipped from Russia to India last year. The International Energy Agency (IEA) disclosed in the middle of this month that Russia's Urals crude oil discount reached a record level. Industry analysts believe that India will continue to purchase low-priced Russian crude oil in the future.However, there are questions about how India pays Russia for purchases, as Russia is sanctioned by the United States and its allies. Analysts believe that during Russian Foreign Minister Lavrov's visit to India, the two sides will discuss how to use rubles and rupees directly, or make payments by anchoring a third-party currency.

According to CCTV news reports, on March 29 local time, the head of the Russian delegation, Mezinsky, said after the first day of the fifth round of Russia-Ukraine negotiations that Russia had received a written proposal from Ukraine, confirming that it remained neutral and free of charge. Willingness to nuclear status, including abandoning the production and deployment of all types of weapons of mass destruction.At the same time, Russian Deputy Defense Minister Fomin said that the Russian Ministry of Defense decided to significantly reduce military operations in Kyiv and Chernihiv. Mezinski also said on the same day that Russia is taking two steps to ease the conflict with Ukraine. The meeting between Russian President Vladimir Putin and Ukrainian President Volodymyr Zelensky can be held simultaneously with the initial signing of the peace treaty between the foreign ministries of the two countries. Russia is not opposed to Ukraine joining the EU. Peace will come sooner if we move fast on the treaty work and reach a mutual compromise. The negotiation between the two sides is very constructive. The Russian side is studying the proposal of Ukraine, and the relevant information will be reported to President Putin.Podoljak, adviser to the Ukrainian President's Office, also held a press conference on the fifth round of Russia-Ukraine negotiations. Podoljak said that in-depth consultations are currently underway on some important issues, the most important of which is to reach an agreement on Ukraine's international security guarantees, because with this agreement, the Ukrainian side will be able to end the war according to its own needs.The second very important issue is a ceasefire to resolve all humanitarian issues, which need to be resolved immediately and the relevant negotiations are now underway. In an interview with Turkish state media, Podoljak said that Turkey will become one of the security guarantee countries, and the security guarantee countries need to provide military support. In this case, Ukraine can become a neutral country.Podoljak said that Ukraine is currently unable to reach an agreement with Russia on security issues, and the Ukrainian side believes that an international agreement should not be reached due to military pressure. Ukraine could discuss other topics if security guarantees ensure that Russia withdraws. Podoljak said that the negotiations will continue. Ukraine plans to invite all security countries to hold multi-party talks. He hopes to reach an agreement within two weeks. Under such circumstances, he hopes that the leaders of Russia and Ukraine can meet.In addition, it is worth mentioning that on March 29, local time, Ukrainian negotiator Oleksander Chaly said that Ukraine proposed a new security system during the talks on Tuesday. Under the new system, Israel, Poland, Canada and Turkey will be the guarantors of Ukraine. There are enough grounds for a Zelensky-Putin meeting and a Russian response is awaited.

Analysis believes that the contradiction between crude oil supply and demand is still sharp, and the market outlook is optimistic

Gu Shuangfei, deputy manager of the South China Futures Consulting Service Department, said that the news that pushed up oil prices in the early stage has all loosened to a certain extent: first, the export of Kazakhstan’s CPC crude oil terminal has partially resumed; second, it is difficult for the EU to reach an agreement on banning Russian crude oil imports; third, The market once again revealed that the United States will continue to release strategic inventories. Affected by the news, oil prices fell sharply yesterday. However, the current crude oil supply is still in a tight state, which is difficult to change in the short term, and the gap between supply and demand is still more than 1 million barrels per day.In addition, the market is raising concerns about the outlook for fuel demand in China. Li Yunxu, a crude oil analyst at SDIC Anxin Futures, said that the recent severe epidemic situation in some parts of the country has had a marginal impact on oil demand. Domestic refined oil prices have been running weakly, and refining profits have continued to be under pressure. The operating rate of Shandong's refining has increased from about 66% at the beginning of the year. % fell continuously to around 53% last week, and the operating rate of main refineries was relatively stable. At the same time, the number of commercial flights in flight around the world has been slowly declining since March, and the gap with the same period before the epidemic has increased from 12% to 15%. It is also expected to be mainly dragged down by domestic flights. Demand for overseas jet fuel is expected to remain relatively positive on the whole, but with the intensification of Western sanctions against Russia and rising inflationary pressures, European economic growth may face significant pressure in the later period.Gu Shuangfei further stated that the main factor affecting oil prices is still whether the EU imposes a crude oil embargo on Russia under the conflict between Russia and Ukraine. At the same time, after the export of Russian crude oil to Europe is blocked, whether other regions increase purchases, which has become the main issue affecting oil prices. . If other regions reject Russian crude, the supply shortage will still be difficult to alleviate, and if new buyers emerge, it means that oil trade will be diverted and global crude supply will be less affected.Founder's mid-term futures pointed out that there may be a turnaround in the Russia-Ukraine negotiations, which has cooled market sentiment, but the recent unplanned supply disruptions in the market have exacerbated the tight crude oil supply situation and formed support for the trend of oil prices. The short-term oil prices are expected to remain high and volatile.Societe Generale Research Guo Jiayi and others pointed out that in the first quarter of 2022, geopolitical conflicts and unexpected supply disruptions dominated oil prices. Against the background of sanctions imposed by Europe and the United States on Russia, it is a foregone conclusion that Russia's crude oil exports will decline, but the key lies in the specific magnitude of the decline in the future. According to the data as of March 16, the decline in Russian crude oil and refined oil exports is better than the market's worst expectations, which also supports the fall in oil prices from the highs in early March.In this case, if the future of Russian crude oil exports is worse than the market pricing in early March, the oil price will reach a new high; but if the market finds that there are more ways to export crude oil that can be compromised and price-sensitive purchases at deep discounts With the active intervention of the country, the possibility of a sharp upward trend in oil prices will be further reduced.
於 4月 01, 2022